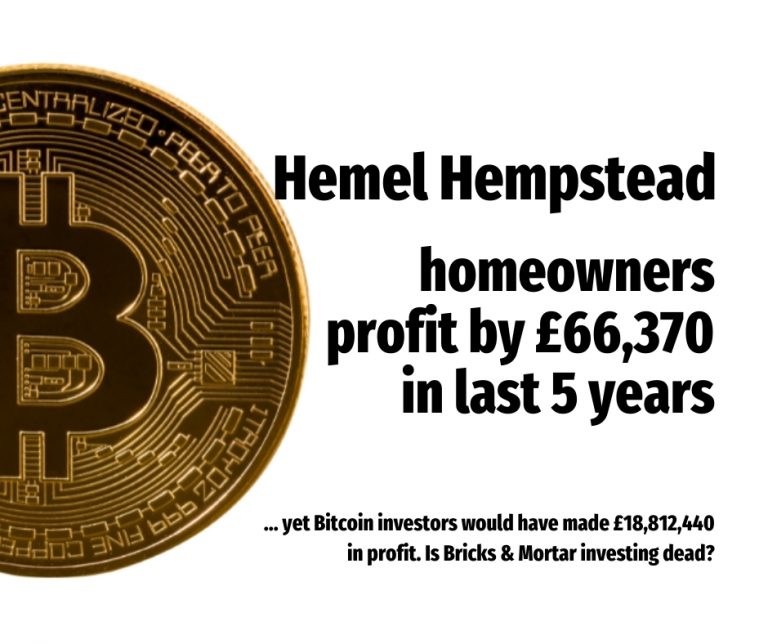 Investing in property has historically been a sound investment, yet alternative investments (like Cryptocurrency) have been gaining traction over the last five years. So, should we all ditch buying our own home and buy Bitcoin?

Cryptocurrency with such names as Bitcoin and Ethereum are being bandied about as the new investment vehicle everyone should be investing in. But is Crypto a sound investment or just an ‘end of the seaside pier one arm bandit’ speculation?

Well to start, I need to discuss the difference between investing and speculation.

I have always seen investing as making a thorough detailed evaluation (and you are realistically sure your principal lump sum is relatively safe), you then have an opportunity to make a profit. Whilst speculating is all about putting your money into an asset that has ambiguous protection of your principal lump sum … and you have an opportunity to make a large profit but also the potential to make a huge loss.

In a nutshell, investment should be as interesting as watching paint dry and speculating should be as exciting as putting all your money on red on the roulette wheel.

So, let’s see what has happened to both Cryptocurrency and Hemel Hempstead property in the last five years.

We now ask, what would have been the return if you had invested the same amount in Bitcoin?

What about the return if you had invested the same amount in Ethereum?

Yet only In June, when China placed stringent controls on how its population can use Cryptocurrency, Bitcoin dropped in value by 30% in one day. Also, this year, we saw another fall in Bitcoin when Elon Musk tweeted that Tesla were banning the acceptance of Bitcoins to buy its cars.

Can you imagine the value of your Hemel Hempstead home dropping in value by £135,460 in just one day because of one tweet?

So, if Cryptocurrency is speculation and extremely high risk, surely buying your Hemel Hempstead home is an excellent investment?

It is my opinion that purchasing a home to live in is a massive financial choice that can give you peace of mind and a lovely place to live, yet it is not an investment. I know this is going to sound strange coming from someone in the Hemel Hempstead property industry, but whilst I know it’s common for people to think of their Hemel Hempstead home as an investment, I believe nothing could be further from the truth.

I am not suggesting every 20 and 30 something should avoid homeownership, but if you are edging towards buying a Hemel Hempstead home because you think you are making a savvy investing choice, think again.

The concept that the home you live in can be an investment comes from the statistic that, historically, property values increase. We all know someone, our Mum and Dad or Grandparents for example, who purchased their Hemel Hempstead home in the 1950’s or 1970’s for the price of an Xbox and it’s now worth more than you make in ten years in salary.

Yet, I believe, it’s not an investment only because it goes up in value.

Between 1989 and today, Hemel Hempstead property values, after removing inflation, have gone up by 50.37% … sounds great until you realise that is only 1.57% growth per annum (after inflation).

Sounds rubbish, doesn’t it? But guess what? Does it really matter?

A real investment needs more than the outlook of an increase in value.

A home has a more important primary purpose.

Possibly the specific biggest reason why your Hemel Hempstead home is not an investment is because its prime purpose is providing a roof over the heads of you and your family. One of the most rudimentary issues that makes an investment an investment is your capability to decide the timing of your possession of the investment.

The absence of ‘real’ control over the timing of buying and selling our Hemel Hempstead homes (and note I use the word home and not house) has had a significant harmful effect on property as an investment.

In all my years in the property profession, I have seen numerous Hemel Hempstead people buy houses at the top of the market (1988 and 2008) because that was the time that they required a home for their family, but those same people became stuck when having to sell their homes a few years later because of personal circumstances, albeit for a loss.

Then I have seen other Hemel Hempstead people buy at the bottom of the market (1993 and 2011) because that was the time that they also required a home for their family, and those same people had to sell their homes a few years later due to personal circumstances, albeit for a huge profit. Are the second set of people more savvy investors? No, it was just good or bad timing, and that is not uncommon when it comes to buying homes, and so has to, in my opinion, exclude a home as an investment.

A Hemel Hempstead home cannot be an investment if you never plan to sell it … and not buy another home.

While it is fact that Hemel Hempstead homes usually increase in value, there is only a partial opportunity to tap into that growth. The best way to sell your Hemel Hempstead home is after it has experienced a massive amount of value increase, sell at the top of the market, move into rented accommodation, then buy at the bottom of the market. Nevertheless, how do you know when it is the top and bottom of the property market (and moving home is considered the third most stressful thing you can do after death and divorce).

That doesn’t sound like an investment to me, does it to you?

Ok, most people sell and buy another home, so when you do sell your Hemel Hempstead home, you will have to use the profit you have made from the sale of your original Hemel Hempstead home to purchase the next home as you will be moving from one home to another. This means your profit (equity) is trapped profit.

The only time that doesn’t happen is when you either trade down to a less expensive home, or move into rented accommodation, yet both scenarios are quite rare occurrences.

Using your Hemel Hempstead home as a bank account?

In the early 2000’s, many banks and building societies were encouraging homeowners to re-mortgage their homes as property values rose by 15%+ a year. By extending the term of the mortgage, you could easily borrow £20k, £30k+ for fancy holidays and new cars and the monthly mortgage payments would be lower – that was like free cash!

Known as equity-stripping, a lot of Hemel Hempstead homeowners found out the hard way during the Credit Crunch that they had in fact bought themselves negative equity when property values crashed. That left them powerless to re-mortgage to lower the monthly payments when the interest rates dropped in 2009, yet unable to sell to move to a less expensive property because of the negative equity. Finally, to add insult to injury, as the mortgage term had constantly been pushed into the future, they had the prospect of having to pay their mortgages until their late 60’s/early 70’s.

Every homeowner knows it costs money to maintain their home. Replacement windows, soffits, roof, carpets, kitchens, bathrooms, boilers, flat roofs – the list goes on. Over the 25 years of a mortgage, that can add up to many tens of thousands of pounds, yet one can justify those costs since your home is providing you shelter. But that gets back to the original principle – a home is a shelter, and not really an investment.

But isn’t renting out a property an investment?

The solid fact is that your Hemel Hempstead home, the home that you live in, basically won’t provide any form of cashflow when you are a homeowner, unless you move out and rent the whole house to someone else. That is called a buy-to-let investment – of course that is an investment and I know many Hemel Hempstead buy-to-let landlords who make a decent living at renting out their rental properties.

Yet, that wasn’t the point of the question I asked originally – “is buying a home, for you and your family to live in, a good investment?”

Of course, you could take in a lodger or rent rooms out as an Airbnb, and this will help you pay your mortgage, Council Tax and other costs associated with homeownership, so it can be worth it for many. However, an “Englishman’s home is his castle” is quite apt and most of us aren’t good with sharing it with strangers.

What do we buy homes for then?

To conclude, I believe the principal reason why so many Hemel Hempstead people consider their home (not house) to be an investment is because we are all obsessed about how much our home is worth.

We are all guilty of checking out Rightmove when a property on our street comes up for sale. Yes, we are nosey by looking at the pictures, yet the most important thing is what price they’re asking and how it compares to our home. Our home is our biggest tax-free asset and especially when it goes up in value, which it certainly has done for the last nine or ten years, it certainly can feel like an investment then.

However, during the five property crashes that we’ve had since World War II, not only did property values not increase, but they fell. Some dropped dramatically. For homeowners in that position, not only was their home not an investment, but it had become a huge liability.

Thank you for taking the time and trouble in reading this article. I must stress that I’m talking about our own homes as an investment and not buy-to-let investment which is a completely different animal and certainly is an investment, if done correctly.

One final thought – for those of you buying and selling Cryptocurrency – enjoy your roller coaster. For me, the thing about property is this; you can touch it, you can feel it, there is something reassuring about a 9-inch red brick and tiled roof. It’s home, it’s where you bring up your family, it’s where memories are made and the best investment you can make in life is with them, your family … and for that – it is a priceless and enduring investment.

These are my thoughts, please tell me what yours are. 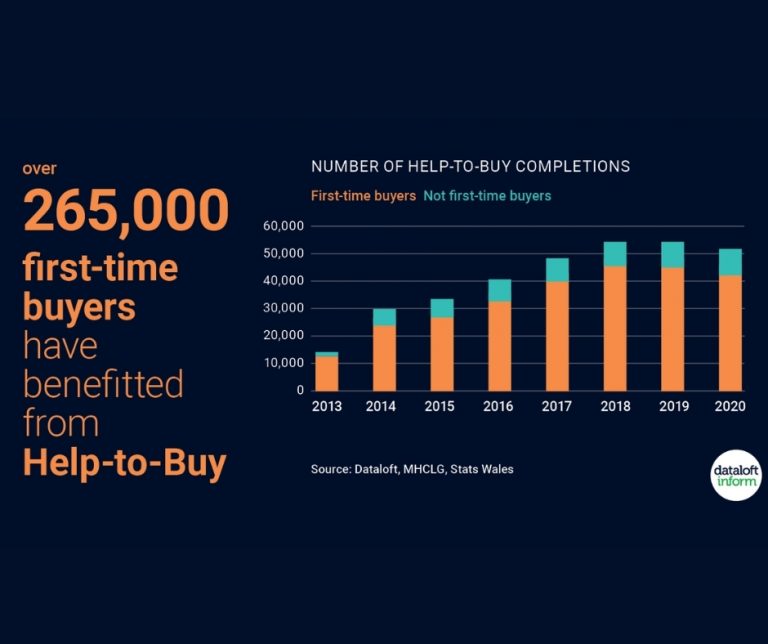 How did Help to Buy, help first time buyers

Will the Hemel Hempstead Property Market Continue to Boom?